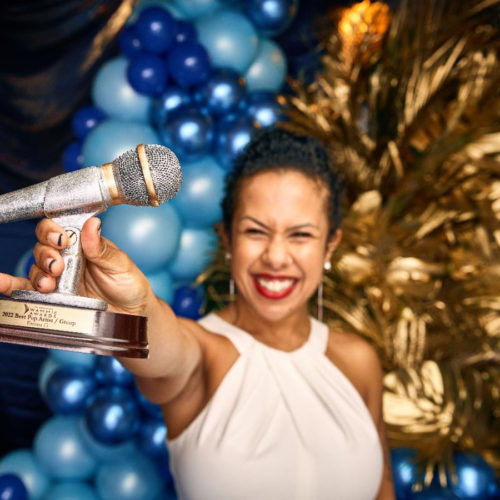 (Washington, D.C.) - The 2022 Wammie Awards, the DMV region’s premier music awards show, was an industry success this year as The MusicianShip hosted over 500 guests at Capital Turnaround in SE, DC. Hosted by ABC7 & The Washington Wizard’s own: Britt Waters, the aisles were filled with the DMV’s favorite music industry collaboratives who have made The Wammie Awards a lasting regional staple for the last 35 years.

“Bringing The Wammie Awards to Southeast DC this year was our main goal and step forward in bringing more arts opportunities and events East of the River as we continue to watch the DMV grow its footprint in the global music industry. Our efforts each year are to award those who are consistently making positive contributions right at home while we make a difference for the artists & musicians of tomorrow. I’m proud to say our 2022 Awards Show did just that and more by raising close to $4,000 for The MusicianShip to return our Summer Programs in person this year. Thank You, DMV!” -Jessica F. Teachey, Senior Director of Community Engagement.

And The Music Doesn’t Stop Here! Join The DC Funk Parade Festival on Historic U. Street!

From April 30th to May 7th, come enjoy The MusicianShip’s annual celebration of ‘Black Broadway’ and the unifying community that adorns the U. St. Corridor!

More information can be found at WammiesDC.org.

Submit Your Nomination Today!
The Wammie Awards, first established in 1985, is a music awards show that recognizes the best music artists & advocates in the Washington DC Metropolitan Region.
Submit a nomination